Will Be Free Zone Companies subject to the Corporate Tax?

As announced in January 2022, the United Arab Emirates will introduce a federal Corporate Tax (CT) on business profits that will be effective for financial years starting on or after 1 June 2023. The following statements are based on a Public Consultation Paper and do not necessarily reflect the final tax environment in June 2023. The tax rate will be 9% of the income (profit) exceeding AED 375,000.

1. No CT for income not related the UAE mainland

Companies and branches that are registered in a Free Zone will be within the scope of the UAE CT and subject to tax return filing requirements. The UAE CT regime, however, will honour the tax incentives currently being offered to Free Zone Persons that maintain adequate substance and comply with all regulatory requirements.

2. CT will be applicable to a mainland branch of a Free Zone Company

If the business registered and licensed in a Free Zone conducts business through a branch in the mainland of the UAE, such income (of the branch) will be taxed at the regular CT rate on its mainland sourced income, whilst continuing to benefit from the 0% CT rate on its other income.

3. Direct Transactions with the UAE Mainland

To prevent Free Zone businesses from gaining an unfair competitive advantage compared to businesses established in mainland UAE, any mainland sourced income will disqualify a Free Zone Person from the 0% CT regime in respect of all their income. In other words, such income will be subject to the CT. There will be, however, two exceptions:

3.1 Sales from a ‘Designated Area’

A business licensed and registered in a Free Zone which is a Designated Zone for Value Added Tax (VAT) purposes can benefit from the 0% CT rate on income from the sale of goods to UAE mainland businesses that are the importer of record of those goods. It has to be seen, whether this only covers transactions with a distributor who is registered under the UAE Agency Law or also with unregistered agencies.

3.2 ‘Passive’ Income not subject to the CT

A Free Zone Business can continue to benefit from the 0% CT rate if its income from the UAE mainland is limited to ‘passive’ income. This would include – inter alia – interest, royalties, dividends and capital gains from owning shares in mainland UAE companies. 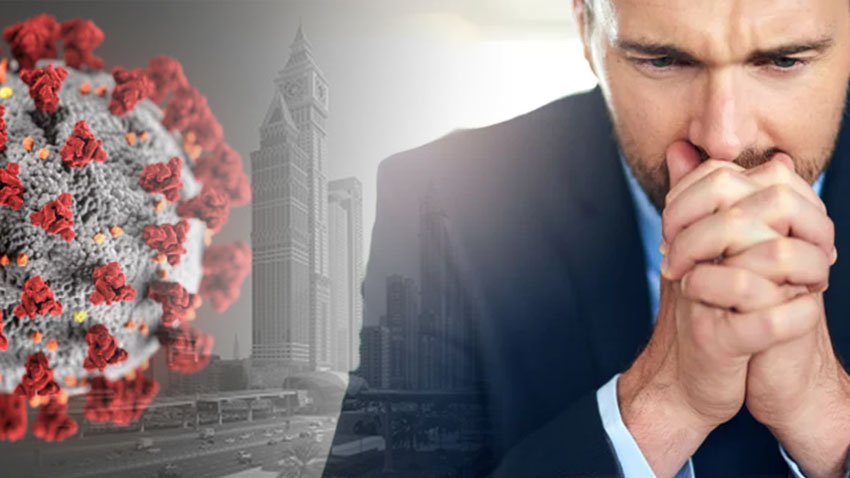 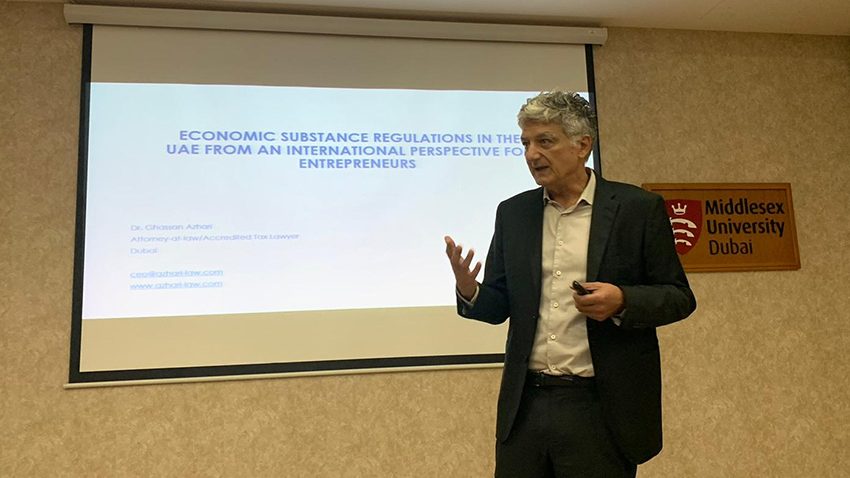 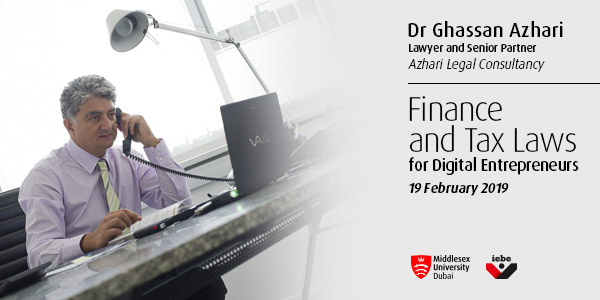 Dr. Ghassan has been invited by the Middlesex University for a special event of the Institute for Entrepreneurship & Business Excellence. He will speak about the international tax framework of e-commerce businesses. The event will take place on 19 February 2019 at 6:30 pm, Middlesex University, Oasis Theatre in Dubai Knowledge City. All our Clients are welcome! 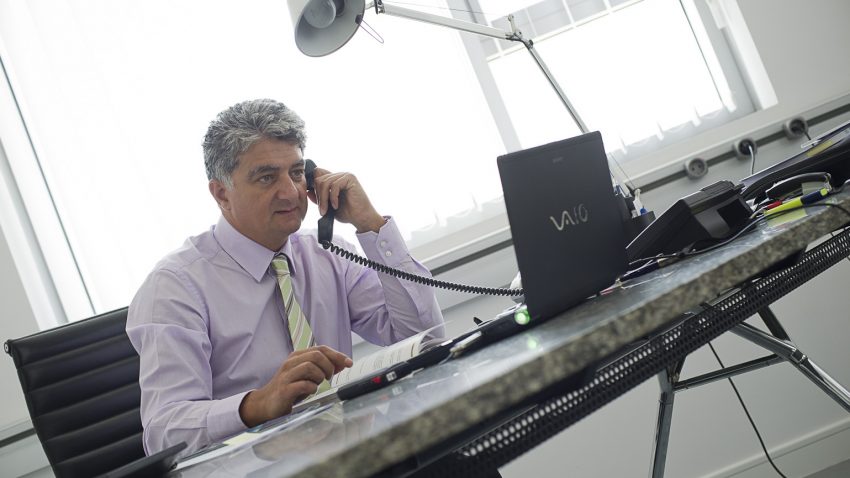 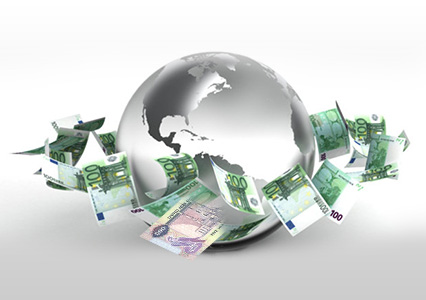 Following the ratification of the OECD’s Common Reporting Standard (CRS) in July 2014, some 104 countries have now dedicated themselves to financial transparency. While 55 countries, including most EU countries, already started to automatically exchange information beginning January 1st, 2017, the remaining countries will do so a year later.

The UAE is one of the countries that will start collecting data from January 1st, 2017 and will report all data collected during the period of January 1st till December 31st 2017 in September 2018.

Accounts that existed prior to January 1st, 2017 (“Pre-Existing Accounts) will be exempted from the Automatic Information Exchange if the account balance is less than USD 250,000.

What does automatic information exchange mean?

On the basis of CRS, participating countries exchange data on a global scale in order to share information on the assets of income of residents in different countries. The information is obtained by local financial institutions so that local tax authorities automatically exchange with other jurisdictions. The purpose is to track individuals who may have been attempting to avoid paying tax in the country they are resident.

Information exchange only on non-UAE- residents

As far-reaching as CRS is, it only affects non-residents as it is not bound on citizenship.

The UAE “tax resident definition” provides that an Individual is a UAE resident, who holds:

This allows for many individuals to be exempt from stating personal financial information by getting a UAE resident visa. So far, the “residency test” does not require to provide the bank with a “utility bill” or a lease contract. However, to be prepared for any tightening, one should consider to have such documents in place or to arrange for a tax residence certificate.

Is a Legal Entity subject to the Automatic Information Exchange?

An entity that is incorporated, registered, managed and controlled within the territory of the UAE is not subject to the Automatic Information Exchange.

It seems that in practice even for legal entities a physical address will be required in order to exempt them from the CRS. This practical approach is reasonable as a legal entity without a physical presence would not be able to manage and control the company from the UAE.

Free Zone Companies and Mainland Companies do have physical addresses. However, even these entities should take precautious measurements in order to make sure that the requirements are met in order to be exempt from the CRS.

Considering CRS’ high efficiency profile, it is advisable to get professional advice. We will advise and help you with your questions regarding CRS, and assisting you with applying for a resident visa or setting up a free zone company. 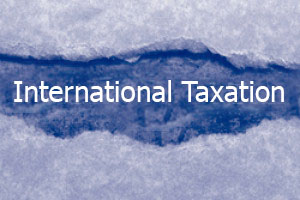 The ruling of the EU-Commission by which Apple Inc. (“Apple”) was compelled to pay EUR 13 billion is without exaggeration a historical decision.

There have been several comments and reactions on the EU-Ruling. Some comments suggest the end of the “Irish Double” and see international tax optimization structures in peril.

The Ruling of the EU-Commission has just been announced and it needs to be examined diligently prior to jumping to any conclusions. However, so far as known publicly, the merits of the case are the following:

In the 1980ies Apple founder Steve Jobs decided to set up affiliates outside the US,  namely in Ireland. At that time, the Irish government supported such industrial locations by granting generous tax reliefs. Till date, Apple uses several affiliates based in Ireland in order to conduct its international business. Theoretically, the profits of these affiliates were subject to the normal corporate tax in Ireland of 12.5 %.

The normal corporate tax rate in Ireland is 12.5 %. Apple Inc. set up a holding in Ireland and negotiated with Ireland a specific tax-arrangement, i.e. the so-called “Double-Irish Dutch sandwich”, by which Apple could almost avoid any taxation of royalties paid from Apple’s European affiliates to the Irish Companies.

The Structure of a “Double-Irish Dutch sandwich”

The recipe of a “Double Irish Dutch sandwich” is rather easy. You use two Irish Companies and in the middle you have a Dutch Company.

The underlying tax principle of a “Double Irish” are provisions in the Irish tax laws according to which a corporation is only subject to [corporate] tax, if it is registered in Ireland and it has its place of business (i.e. the place where the management is located) in Ireland.

The Second Company receives loyalties from its affiliates’ operation in [European high] tax jurisdictions. However, if the Second Company would directly pay the royalties to the First Company (registered in a tax heaven outside the EU), Ireland would levy a so called withholding tax. In order to avoid such withholding tax, the Second Company first transfers the profits to a Dutch subsidiary, as there exists a Double Taxation Agreement between Ireland and the Netherlands which exempts royalties from withholding taxes. By sending the money first to the Netherlands and then to the First Company registered in a tax haven, no taxes will be levied. This particular structure is called “Double-Irish Dutch sandwich).

The Ruling of the EU-Commission

The decision of the EU-Commission is not challenging the corporate tax rates in Ireland which are significantly lower than in most other European countries. Instead, the EU-Commission considers agreement between Apple and Ireland, by which Ireland reduced its tax rates for a particular tax payer, i.e. Apple, an illegal subsidy.

In this context it is important to know that in the European Union subsidies are – generally speaking – prohibited in order to safeguard a fair and competitive business environment. The Ruling of the European Union considers the tax agreement between Ireland and Apple an illegal subsidy violating the principles of fair competition as the “normal” business man has to pay corporate taxes of 12.5 % of his reported profits.

In light of the above, the Apple Ruling does not jeopardize as such international optimized tax structures. However, the Ruling proves that the European Union is able to react to any unfair competition caused by an abuse of tax agreements between its member states and some [privileged] tax payers.

Coming back to the question raised above, one needs to mention that “Double-Irish” was for many years an eyesore for most European countries and as such they put significant pressure on Ireland in order to change its tax regime. As a consequence, the Irish government suspended this structure since 2015. However, the Irish government granted all existing “Double – Irish” tax structures a transition period till 2020.

Apple and the Republic of Ireland announced to appeal the decision of the European Commission, and the final outcome yet remains to be seen. However, as the “Double-Irish” is, since 2015, no longer an available tax structure, the decision will only have an impact on the still existing “Double-Irish” structures.

As such, the decision will have only very little impact on new tax optimization structures as long as these structures cannot be considered as (illegal) state subsidies.