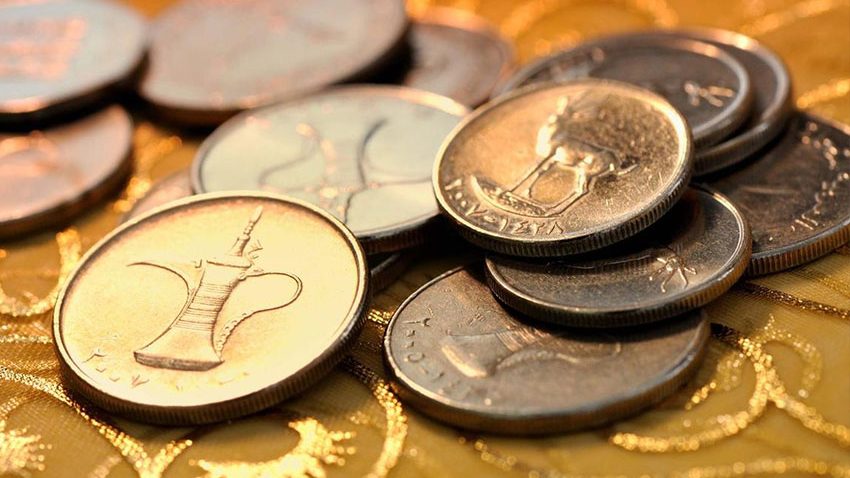 The Emirates has 123 double tax treaties in force or pending, which benefit expatriates and companies.

For a country with very little taxation, the UAE has a large double tax treaty network in place. With agreements in 90 countries – and 33 pending – the Emirates has more double tax treaties than countries such as Ireland, Luxembourg and Singapore.

Being part of an international tax framework provides important protections and benefits for UAE companies and expatriates. Double taxation avoidance agreements allocate taxing rights and ensure individuals and businesses are only taxed once. They clarify how certain types of income, such as dividends, property income and pensions, should be taxed, and lay out rules on non-discrimination to prevent different treatment based on factors such as nationality or residency.

Representatives from the UAE’s Ministry of Finance, the Organisation for Economic Co-Operation and Development and the private sector, celebrated 30 years of signing such agreements – the first treaty was with France in 1989 – at an event in Dubai. The UAE has also implemented reforms to combat international tax evasion in recent years.

Part of the attraction of being based in the UAE for expatriates and multinationals is having no income tax or corporate tax to pay, with the exception of certain oil companies and foreign banks. The UAE only introduced a value-added tax in January last year.

“Because the UAE doesn’t have many taxes, the UAE companies have a greater benefit [from double tax agreements],” says Shiraz Khan, who leads Al Tamimi law firm’s tax practice in the region. “It may mean that they’re subject to a lower rate of withholding tax, and that’s purely because of the terms of the treaty.”

In addition to providing such benefits to companies, international tax treaties “allow for the exchange of information and co-operation between countries to address tax evasion, and provide a framework to resolve tax-related issues or discrepancies between the contracting states”, says Mr Rossel.

Here is what these agreements mean for the UAE: 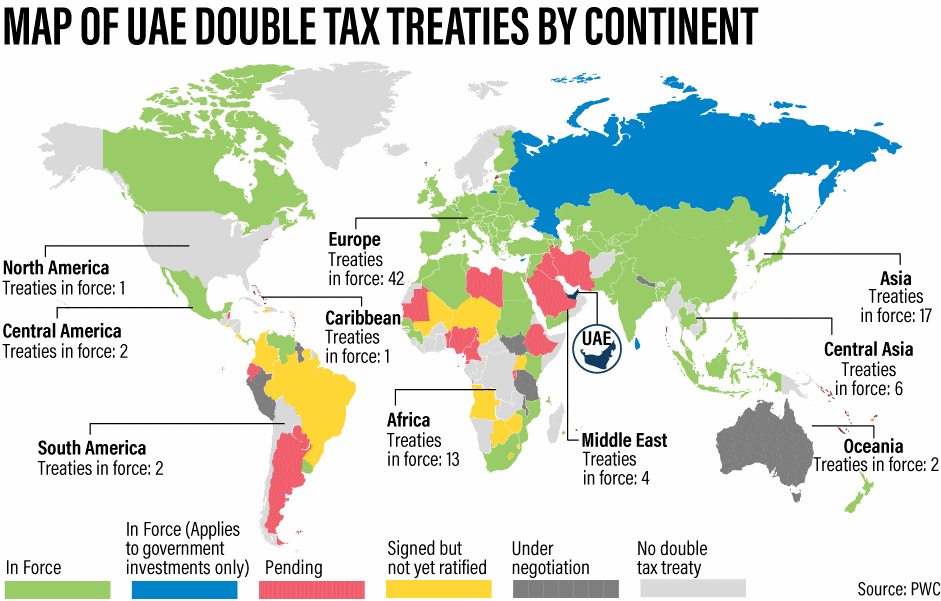 Which countries does the UAE have double tax agreements with?

Of the 90 tax agreements in force, there are 42 in Europe, 23 in Asia, 13 in Africa, four in the Middle East, two in South America, two in Central America, two in Oceania, and one each in North America and the Caribbean. The treaty with Russia is a government investment income tax agreement, which means it only applies to the dividend, interest and capital gains income of governments and their financial or investment institutions.

“We have almost covered more than 120 countries and we are still expanding, signing more agreementswith South American countries and also some additional countries in Africa, as well as working with Nordic countries,” Younis Al Khoori, undersecretary at the UAE’s Ministry of Finance, told The National.

There are 21 pending double tax treaties, 12 signed but not yet ratified and nine under negotiation. The UAE signed an agreement with Saudi Arabia in May last year, the first in the GCC. Countries under negotiation include Australia, Peru and Nepal.

The UAE does not have a treaty with the United States, which imposes taxes on the worldwide earnings of its citizens and green card holders.

“The US in particular has a special treatment for the UAE government and for the double taxation,” Mr Al Khoori said. “We have not negotiated anything, but we have been working closely with the US Treasury on the possibilities to start negotiating.”

South Africans in the UAE who have residency in South Africa may also have to pay foreign income tax soon. Under a double tax agreement with the UAE, a provision in the South African tax legislation provides a pre-emptive exemption for foreign employment income tax, also known as the “expat tax”. That means South African residents who spend more than 183 days in employment outside the country, as well as for a continuous period of longer than 60 days during a 12-month period, are not subject to South African taxation. However, an amendment that will go into effect in March next year, will limit that exemption to income of up to 1 million rand (Dh252,950).

What do tax agreements mean for UAE expatriates and companies?

For expatriates, the double taxation agreements come into play when they have a second residency outside the UAE, says Ghassan Azhari, managing partner at Azhari Legal Consultancy in Dubai.

“For example, between Austria and the UAE, there is a provision that your UAE income is exempted from the Austrian income tax,” says Mr Azhari, an expert in international tax law. “The German double taxation agreement says any income tax you pay in the UAE will be deducted from German income tax, so you will pay full income tax in Germany.”